When a product or system has more than one radio and at least one of them is a transmitter, there can arise intermittent interference problems where the signal from that transmitter causes a nearby receiver’s performance to degrade. To limit or eliminate these types of problems, it is important to perform proper antenna isolation testing during the design of your product.

Your product may pass type approval or certification testing but in many cases receiver performance is not part of those tests. Your customers and users may still experience device communication issues, which ultimately can lead to market rejection.

Transmitters are stronger the closer you are to them

When two antennas are physically near each other, radio frequency isolation, or put another way, propagation loss, decreases between them. The antennas can “hear” each other better as a result, which can become a problem when one of them is transmitting and the other one is receiving or transmitting. There is rarely an issue if both antennas are receiving at the same time. If one antenna or more is a transmitter, the signal from the transmitter(s) can degrade nearby receiver performance. This can also cause certification problems due to creation of signals at other frequencies, which is known as Intentional Radiator, Radiated Spurious Emissions (RSE).

It can help to think of a radio receiver as an extremely sensitive ear trying to listen to transmitters on its frequency that are very far away, and so they’re very quiet. The co-located, nearby transmitter antenna is a bit like a fighter jet at full throttle right next to you. You can’t hear the quiet transmitter you want, because of the loud transmitter you don’t want. This can be the case even if the interference signal isn’t on the same frequency as the desired signal.

The main factor affecting isolation is the proximity of the antenna elements. The further apart they are, the better the isolation. If systems are made up of separate antenna elements, it can help to avoid problems entirely by spacing those antennas wisely. By keeping the antennas separated, the radios won’t interfere with each other. How far those antennas have to be separated is a simple question with a complex answer.

A second factor relates to the losses in the transmission lines that connect antennas to their respective radios. At GHz frequencies, transmission lines of any significant length (more than 1 meter) can present losses that impact system performance and isolation. Transmission line losses hurt link budget performance because power is being dissipated as heat in the line. That same loss reduces the power that gets to a transmit antenna and further decreases the power coming back to a radio from the receive antenna. For this reason, when calculating or measuring isolation, it’s critical to include the actual transmission line losses for both transmitter and receiver.

Another factor to bear in mind is that there is a filter-like effect because most antennas are efficient radiators only at certain frequencies. This situation creates a weak, passive bandpass filter behavior that can amount to an overall meaningful suppression of out-of-band signals, especially when the frequencies are very different.

A strong enough RF signal sent to the first amplifier in the receive chain causing it to go into gain compression can produce front end de-sense. The signal frequency is not of concern; only that the signal amplitude is significant enough to cause gain compression.This situation commonly arises where the transmitting signal is out of band to the receiver. In compression, the effective gain of the amplifier goes down and the receiver’s sensitivity is significantly degraded, often to the point of not functioning. In extreme cases, there can be permanent damage to that first amplifier.

The first amplifier in a receiver can be located inside the radio device or sometimes with satellite systems, mm wave radios and GNSS, located with the antenna. This situation is not limited to active antennas like those used for GNSS or TV/FM reception. Completely passive antennas and any type of radio receiver can experience this problem. The dictating factor is how much energy gets to the first amplifier (LNA) in the receive chain.

Co-modulation happens when one transmitter’s signal hits a second transmitter’s output amplifier. This situation can cause a mixing product of the two transmit signals, or co-modulation, which is radiated from the incident transmitter’s antenna. This problem is fundamentally an RF immunity issue that’s normally dealt with using filters. In this case, they would have to be high power filters suitable for the system’s transmit power.

What do you need to test?

Receivers are not subject to interference at frequencies below the lowest transmit frequency. The network analyzer is set up in a way whereby the transmit port (S1) is on the transmitting antenna, and the receive port (S2) is on the other antenna. It is important that any active antenna circuitry in the antennas themselves is powered properly. For instance, you may need to power an active GNSS antenna with a bias tee and account for the gain of its amplifier when setting the stimulus power.

How good is good enough?

How much antenna isolation is required depends on several factors:

As you can see, “good enough” depends heavily on the radios involved. Many products, especially narrowband licensed radios, list specifications for out-of-band signal rejection in their transmitter and receiver specifications. Other products expect to be the only radio around or simply neglect these specifications. In many cases, you will need to measure the performance of the radios in your system to get this information.

Once you have numbers for rejection of the radios, build a link budget with your isolation values as the path loss. For example, Receive sensitivity (TX Power – isolation – rejection) = isolation margin. All values are positive except sensitivity, which should be a negative number.

What do you do about it?

The easy answer: Move the antennas further away from each other. This solution has little to no impact on individual radio performance other than improving isolation and lowering interference. Every doubling of the distance gives 6dB more isolation, so the first meter or so makes the biggest difference.

The easy solution, unfortunately, is not always practical in small electronic products, so the next answer is to add filtering. If you have the ability to add filtering to the receive path before the first LNA, then there are various small, low-cost, highly effective filter types like SAWs. BAWs, ceramic dielectric, and LC filters that can deliver effective results. These filters have minimal impact on total receiver performance and make the product much more robust against interference.

If you have to transmit through the filter, your options are limited to those that are compliant with your transmit power. Various types of ceramic dielectric, LC, machined cavity, comb and interdigital filters can take high transmit powers and provide good performance. The trade off is that they are bigger and, sometimes, more expensive. One option is to turn the transmit power down on the offending transmitter. This solution obviously impacts the system link budget. In some cases, you can turn the transmitter power down a little and find a compromise between interference and link budget. If the radio type does not allow for turning the power down, an alternative is to increase the loss between radio and antenna. This situation is even worse for the link budget because it impacts both receive and transmit performance, but in some situations, it may be the only option.

Sometimes you can exploit the radiation patterns of antennas to create additional isolation between them. A common example is placing vertically polarized omni-directional antennas on a tower directly above/below each other. The radiation pattern directly up and directly down is a null in these antennas, which can be exploited to get 20dB or even 30dB of additional isolation for a given separation distance. You can exploit high-directivity antennas like Yagi, panel, and dish antennas in a similar way.

Don’t let isolation be something you address after-the-fact. Tackling isolation early on helps mitigate problems down the road. With careful planning at the system level, your radio systems will work together more coherently and efficiently. 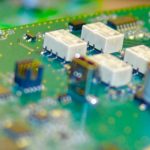